Today I tested SARTrack ( http://www.sartrack.co.nz/ ), a program jam packed with features for APRS users and search and rescue teams.   At first I was just curious about the software in comparison with another APRS tracker I use, PinPoint APRS.   While the two software packages are similar in basic functionality, I would say that SARTrack is designed more for the serious user who needs a lot of information and communications vs. the casual user who would probably prefer the simpler interface and setup of PinPoint APRS.  Judging from the help manual of SARTRack alone, I can tell I have a lot to learn!  NOTE: I’m in no way saying that SARTrack is better than PinPoint APRS.  It’s not really an apples to apples comparison.

As I started digging into the features, I  found something VERY useful.  SARTRack has a built-in messaging feature that lets you exchange messages via APRS stations through a handy interface that resembles simple email.

I turned off the Internet connection on my laptop and used only my Kenwood TH-D72A tuned to 144.390 and connected via TNC to the SARTRack software. My location was indoors next to the window of my 5th floor office in Newport Beach, CA.

I had no problem receiving other stations’ info on the main map. To simulate a station to station test, on another computer connected to the Internet, I used FindU’s APRS Messaging Interface.  I sent a message from KM6ZPO to KM6ZPO-14 (the SSID for my SARTrack radio-only station).

As you can see in the screenshot below, the message was received and I was then able to carry on a conversation (with myself) in “chat” style.  Messages back and forth took less than a minute to receive over RF and were stored in a log. 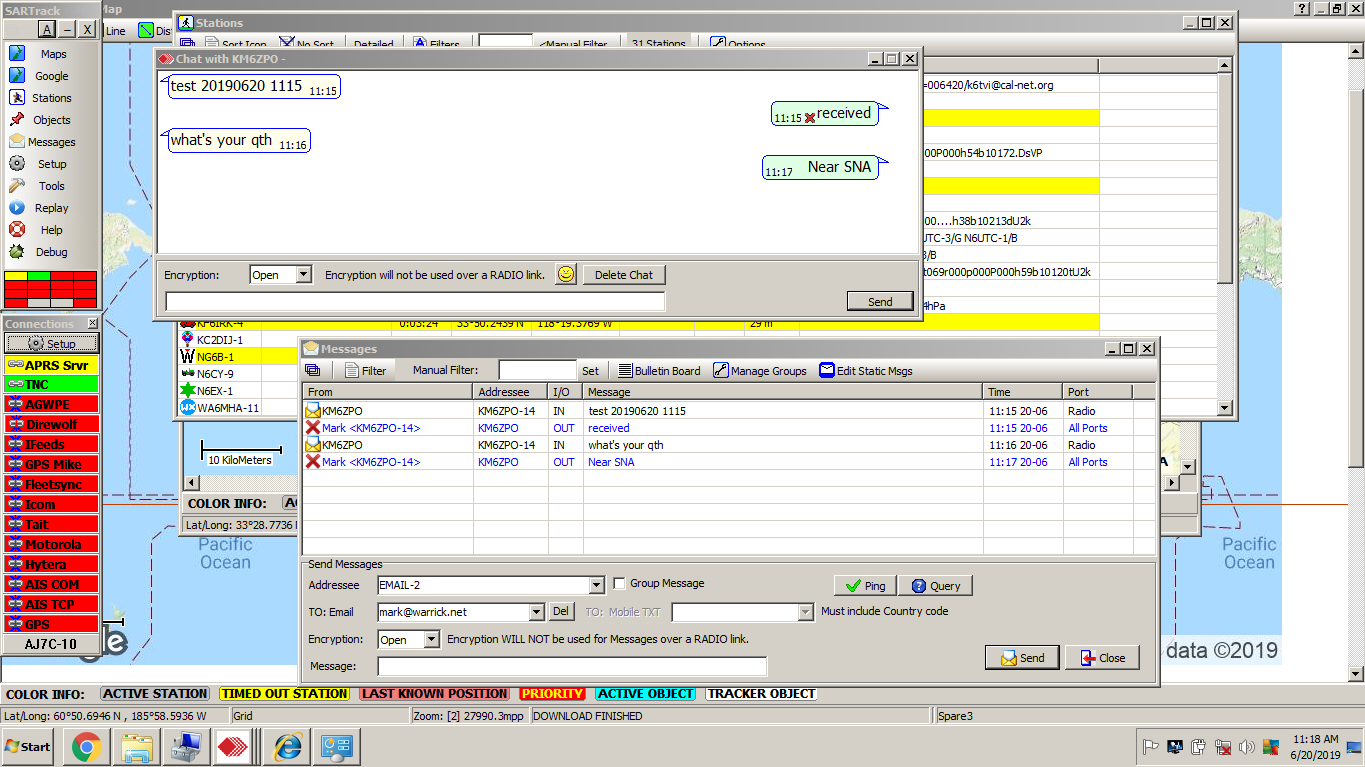 FindU’s logs of my transmissions:

See my entire message log here including past messages via other stations.
http://www.findu.com/cgi-bin/msg.cgi?call=KM6ZPO

What’s the Practical Use of This?

OK so you’re probably wondering: where would this software and its functionality be useful?  Well basically for what is was intended for: Search and Rescue!  But of course you could also use it for other things like exchanging bearings on a fox hunt, messaging when the Internet goes down, etc.  So long as the digipeaters have power (and most will even after a major power outage), it would be very easy to keep in contact with other ham stations via APRS.